Demetria Devonne "Demi" Lovato (born August 20, 1992) is an American singer, songwriter, musician, and actress. Her earliest roles included Angela on Barney & Friends, before she became better known for her starring roles in the Camp Rock movies, she portrayed as Sonny Munroe in the Disney sitcom, Sonny with a Chance, and as the star of the 2009 movie Princess Protection Program. She is also involved in philanthropic activities through charity work and various social and environmental causes. 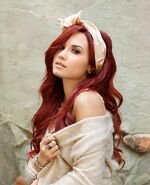 Add a photo to this gallery
Retrieved from "https://princessprotectionprogram.fandom.com/wiki/Demi_Lovato?oldid=4138"
Community content is available under CC-BY-SA unless otherwise noted.